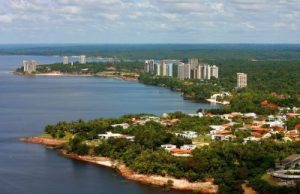 The very first settlement in this area was set up in 1669 when the São José do Rio Negro fortress was built by Captain Francisco da Mota Falcão. The state of Amazonas as it is known today was only established in 1889 after Brazil became a republic, until then it was called Sertão das Amazonas (Amazons’ Hinterland). The region grew in importance with the exploration of the rubber tree tap, a produce exclusive of the Amazon at the time. From 1895 to 1911 what became known as “rubber boom” attracted a lot of attention and money to this small city that was named Manaus in 1856. The port of Manaus became a thriving port and a magnet to cultural manifestations that took place in the Manaus Opera House, built with materials imported directly from Europe. Walking the streets of Manaus today, one see flashes of a rich society and city in its many buildings. Highlights are: the Manaus Opera House, the Floating Dock, Rio Negro Palace (Government) and the Customs Building. Manaus today has an extensive gamut of industries from computers to motocycles and has become since the ’80s the Amazon forest main gateway.

The seasons in the Amazon follow a very distinctive pattern, instead of winter and summer – which can barely be perceived, it is the high and low waters that dictate activities. In the Amazon the waters begin to rise in November and December reaching the highest level in the months of March to June. From July to September, the waters begin to ebb reaching its lowest in October and November.